In 2004 Poseidon Engineering brought precision waterjet cutting to the North East of Scotland.

Investing in the best and most reliable equipment and with unrivalled experience we have grown to become a company with an enviable reputation for excellent quality and first class customer service.

Our market leading technology allows us to use multi-head cutting for large production runs or single head for one off parts or R + D work.

Our extensive experience and attention to detail reassures our customers that their project will be carried out in a timely and professional manner.

Our purpose built facilities in Oldmeldrum

Materials held in stock include the following: 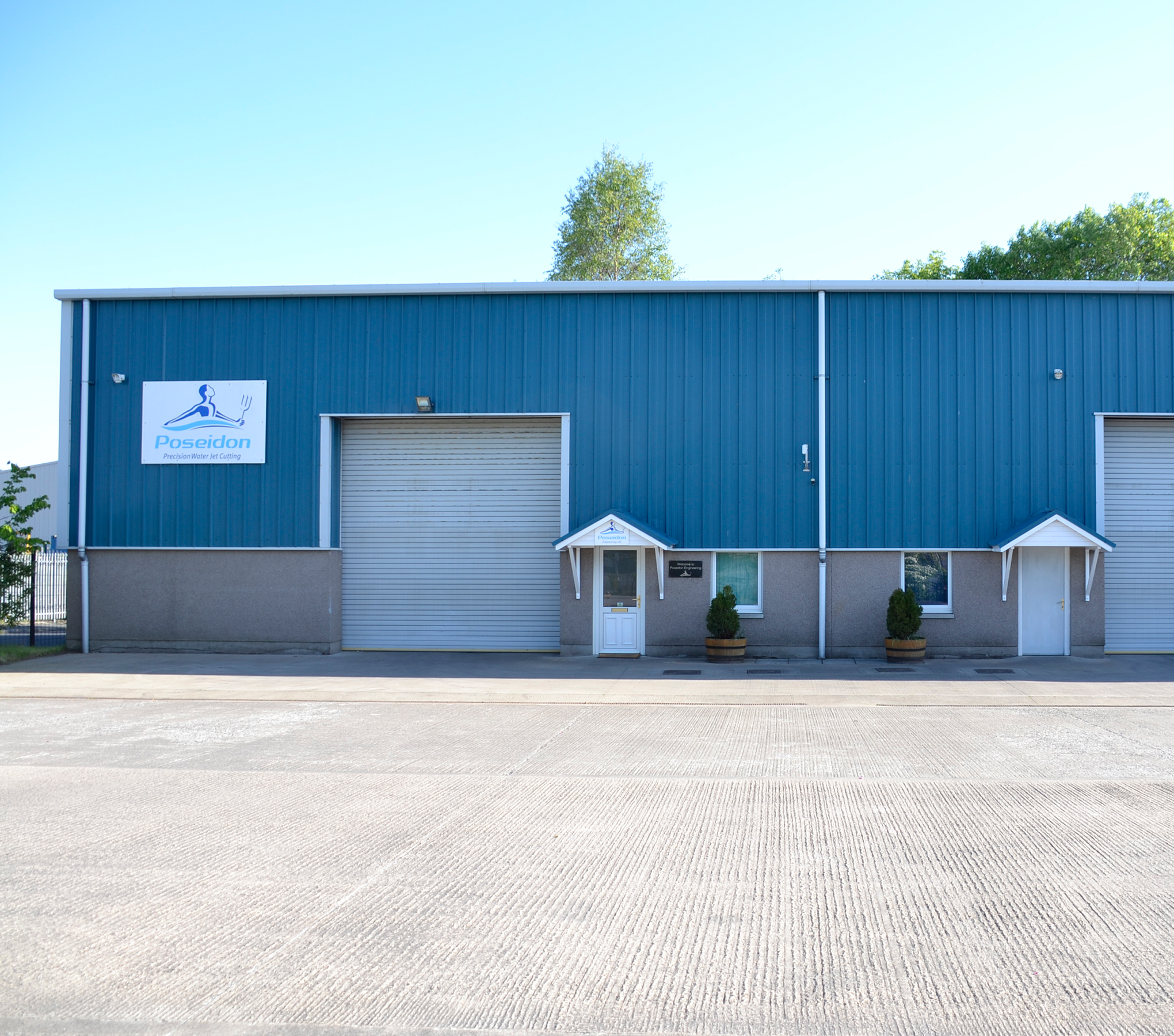 How does waterjet work?

Waterjet uses a mixture of high-quality garnet and water at pressures in excess of 60,000 psi.

This cuts the material by supersonic erosion with nozzle velocities up to Mach 3. This system in conjunction with the latest Taper Control cutting heads and highly accurate machine beds allows tight tolerances to be achieved in virtually any material from 0.15mm stainless steel to 240mm granite. 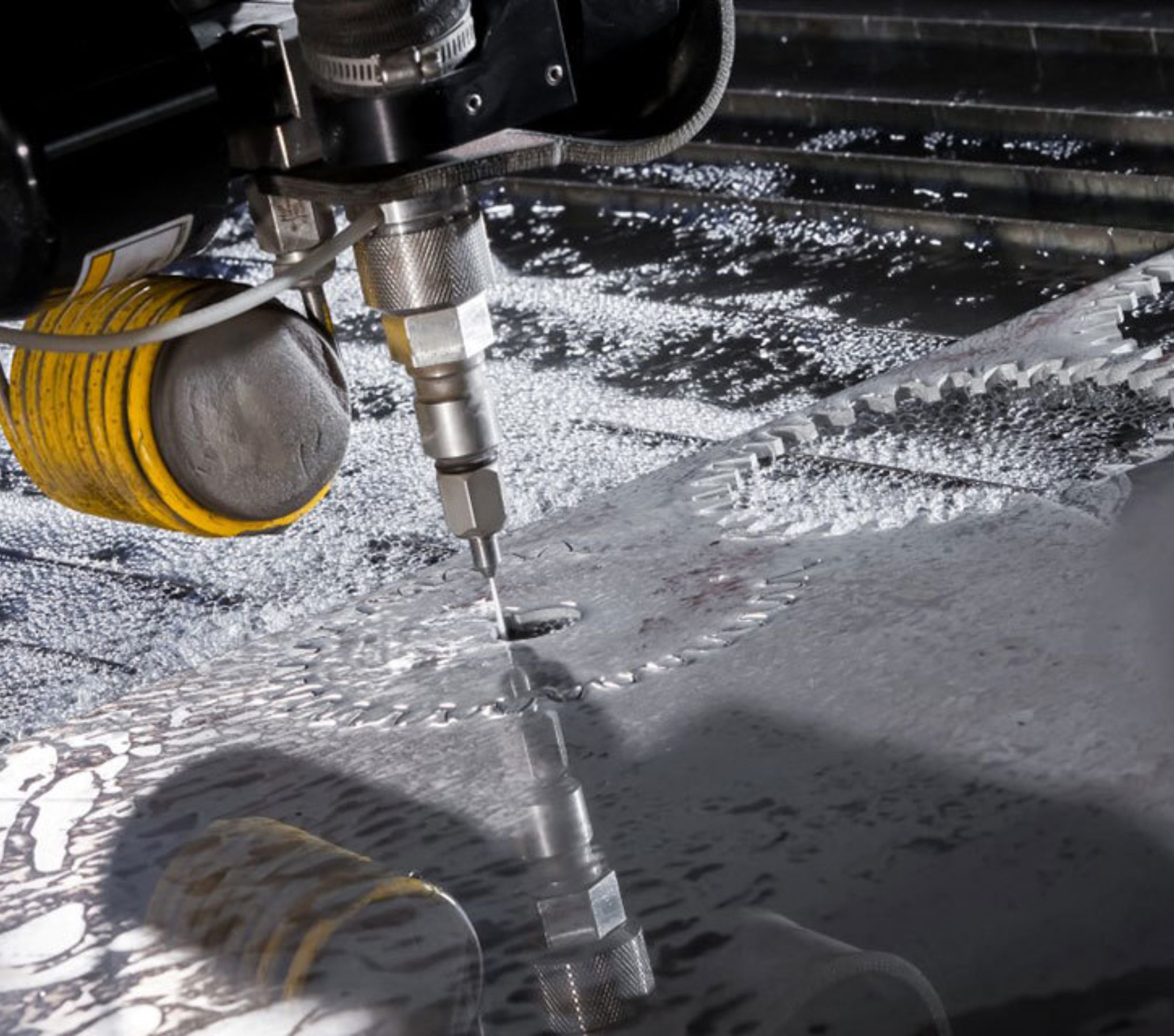 What are the benefits?

No noxious gases or liquids are used in waterjet cutting, and waterjets do not create hazardous materials or vapour making it an environmentally friendly and safe process.

No heat affected zones or mechanical stresses are left on a waterjet cut surface.

The waterjet has shown that it can do things that other technologies simply cannot. From cutting wafer-thin details in glass to rapid hole drilling of titanium the waterjet has proven itself unique. 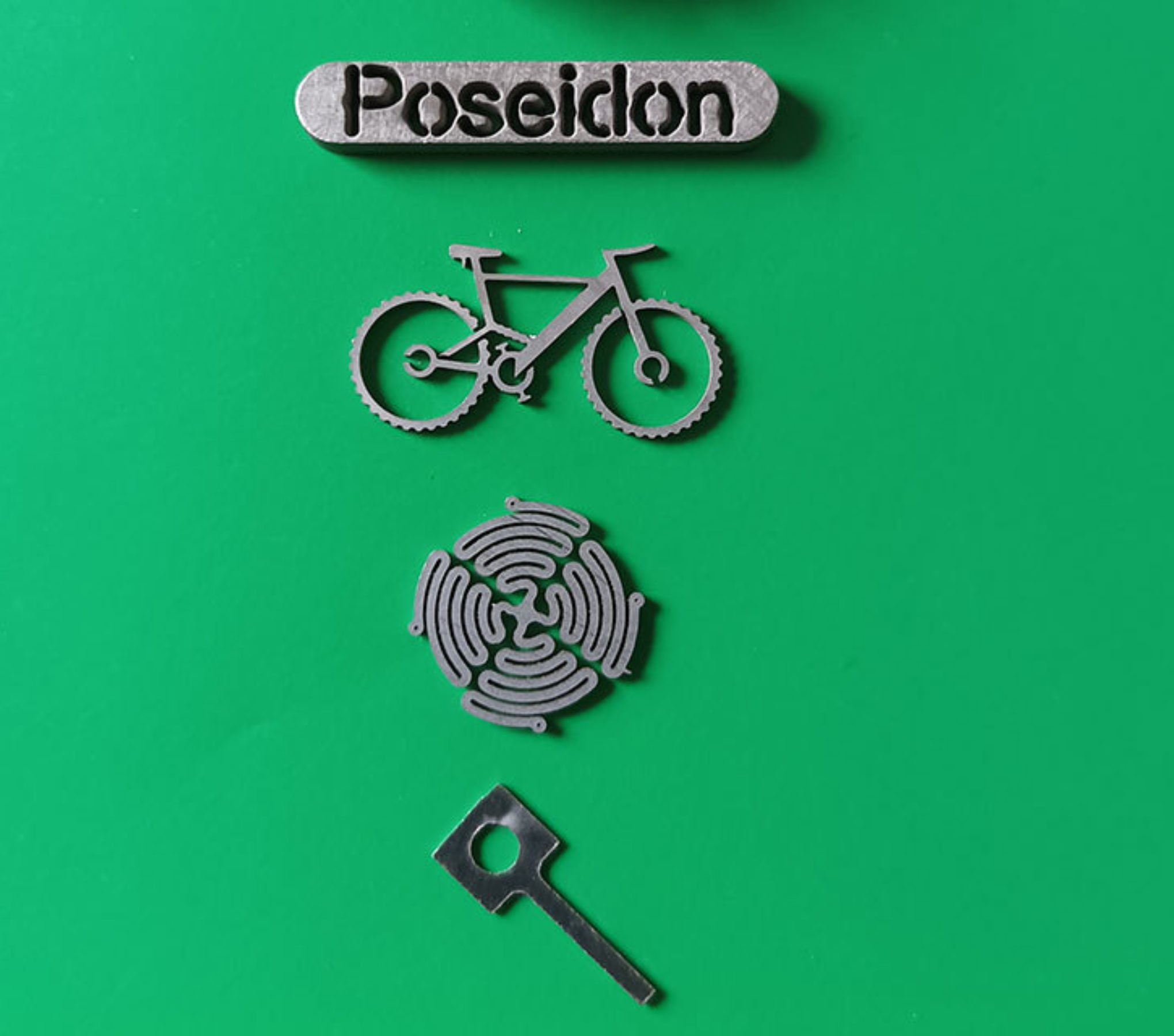 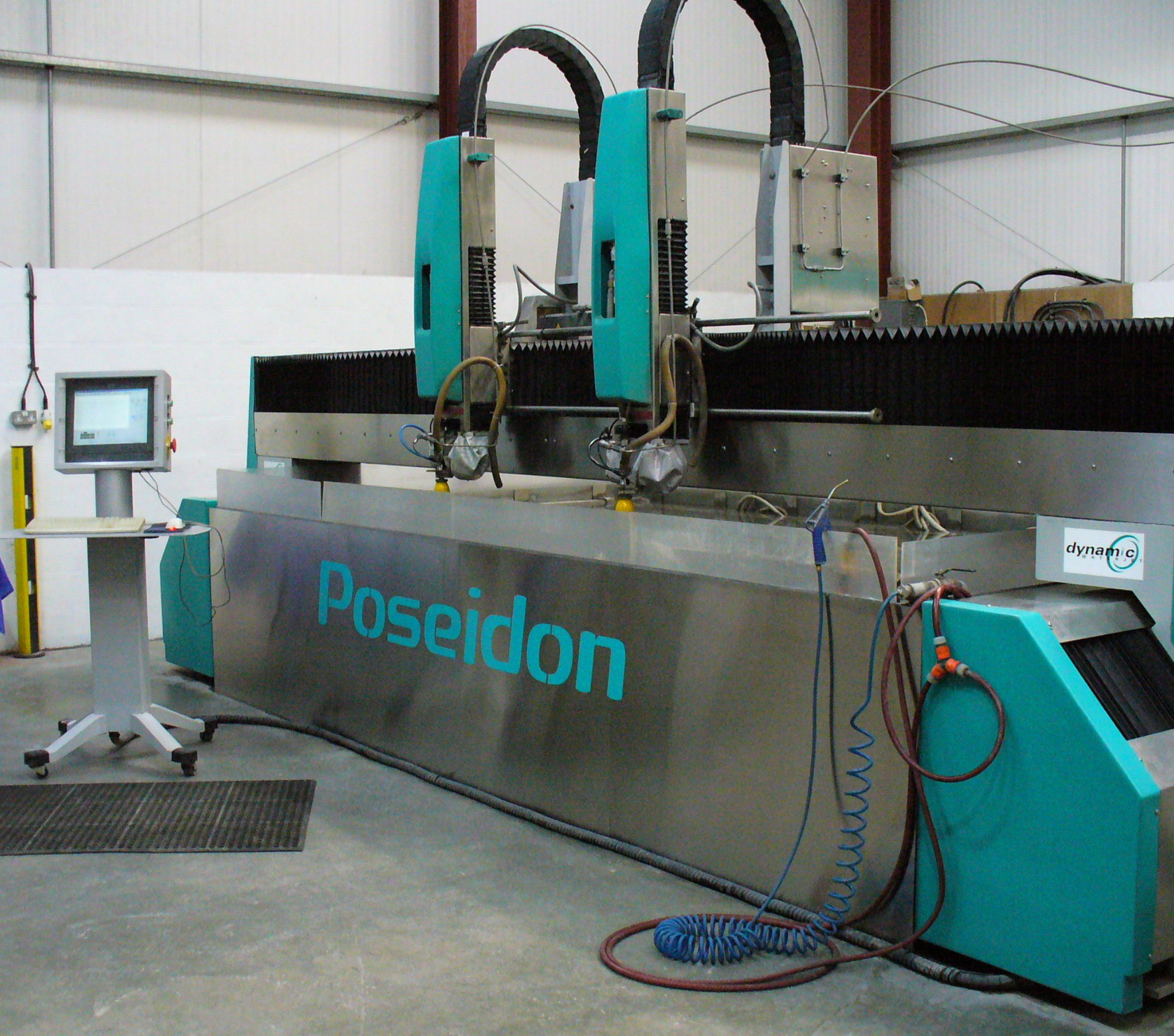 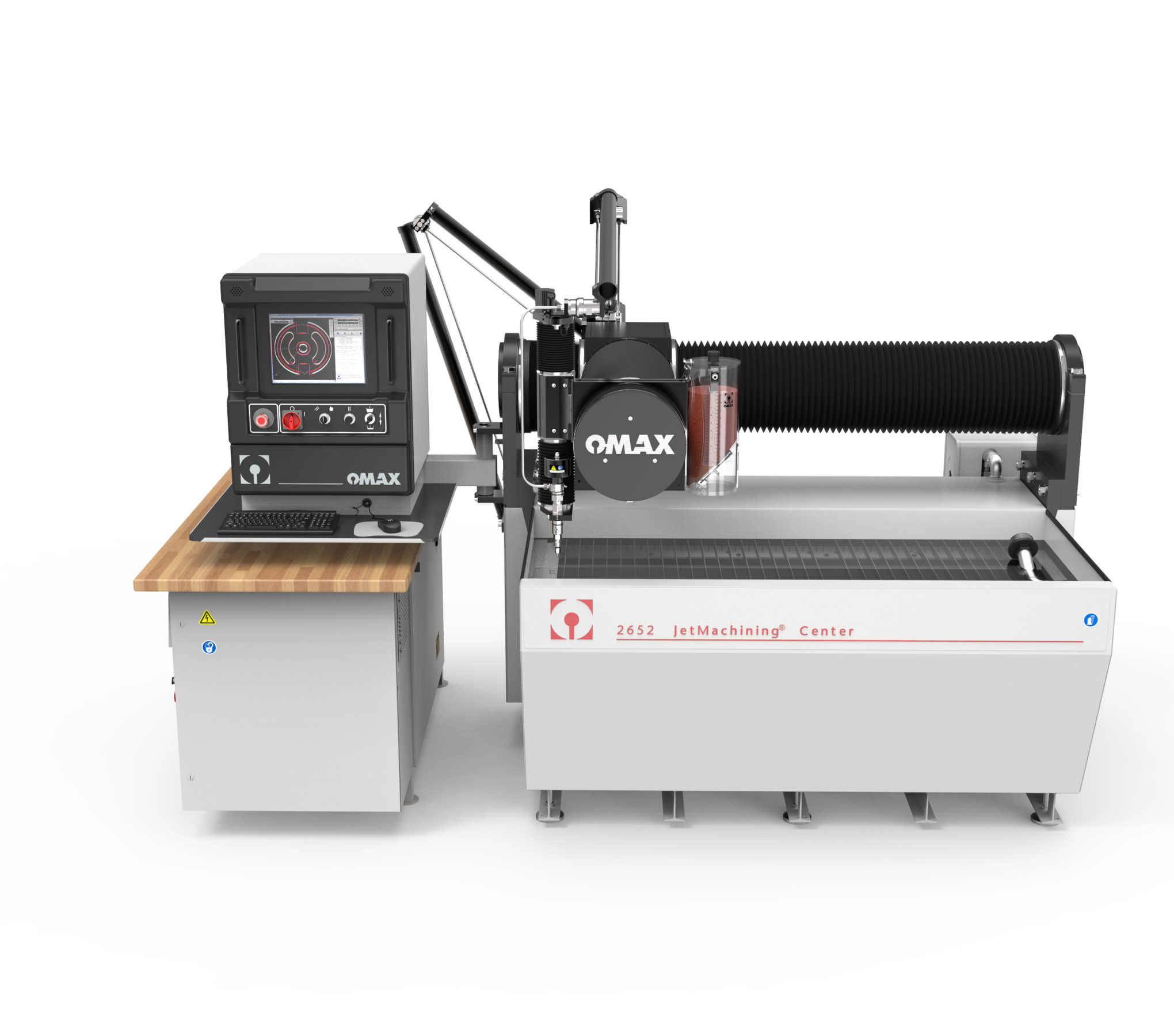 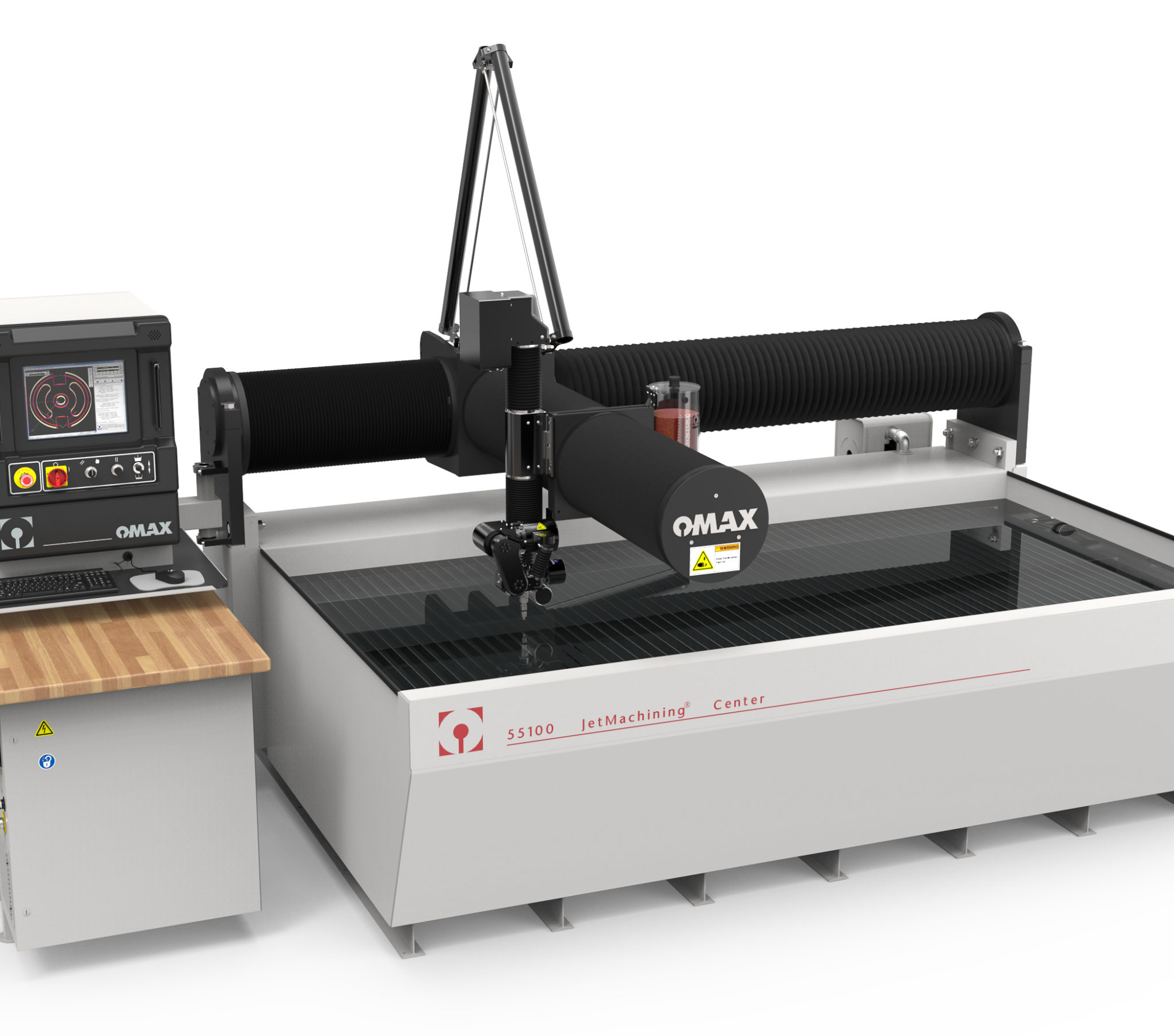 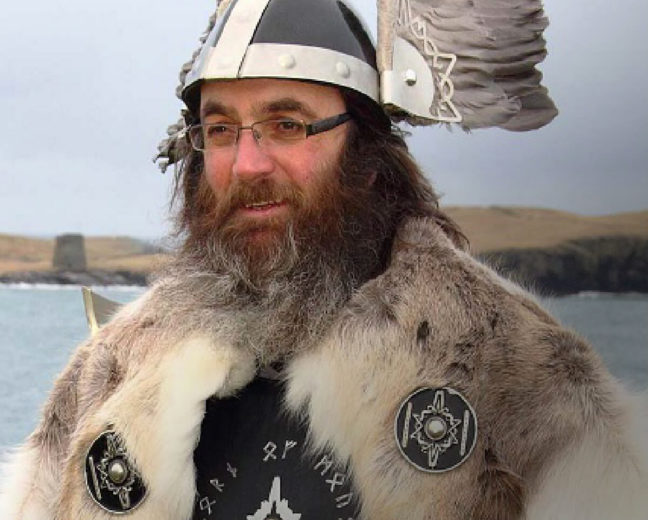 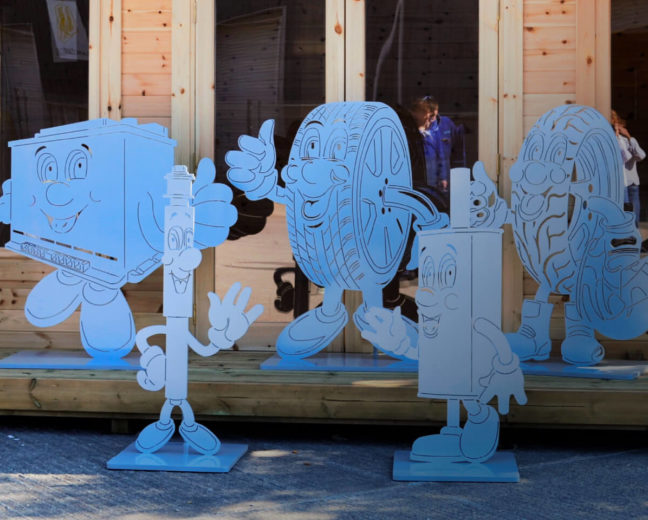 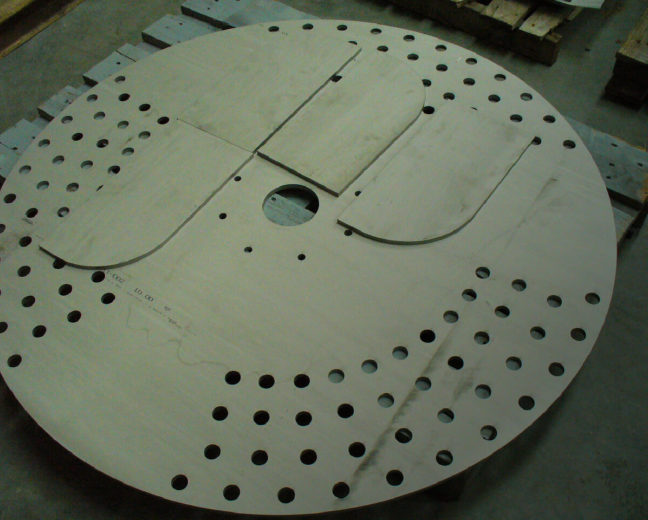 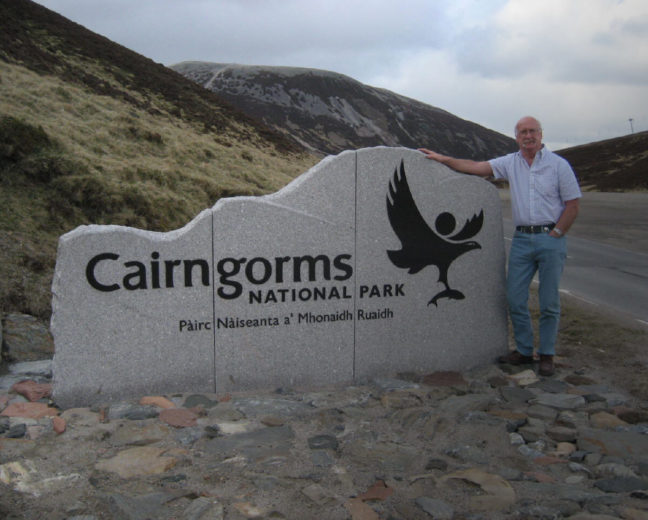 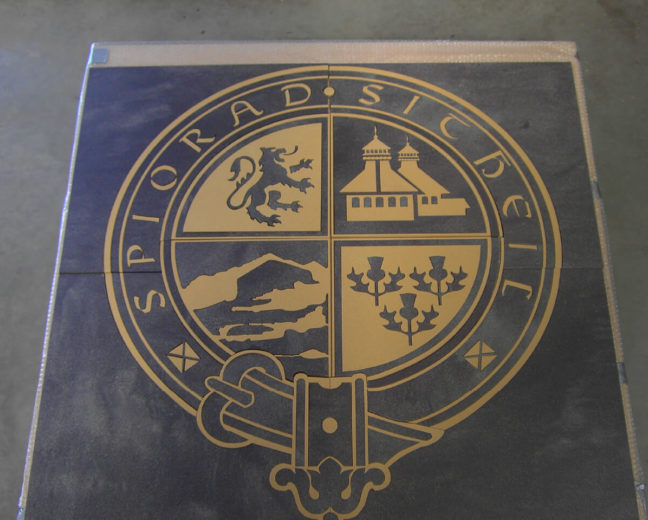 Most people are aware of the Viking festival of Up-Helly-A which is held in Lerwick on the Shetland Isles mainland.

However, there is a lesser-known festival which is held on the South Mainland known locally as “da sooth end” of the Shetland Isles.

This is known as SMUHA (South Mainland Up Helly A).

We were approached by the organiser of SMUHA 2012 known as the “Guizer Jarl” to produce thin stainless steel profiles for the Viking uniforms of the “Jarl Squad”.

It was a fantastic project to be involved in and the attention to detail involved in the outfits is incredible.

The passion of the Guizer Jarl, The Jarl Squad and everyone involved is a testament to the fascinating Viking history of the Shetland Isles and how important it is to them.

We were very lucky to meet the Jarl Squad when they came to the North East on their mainland tour.

A raucous time was held in the Newmacher hotel. But that’s a story for another day. 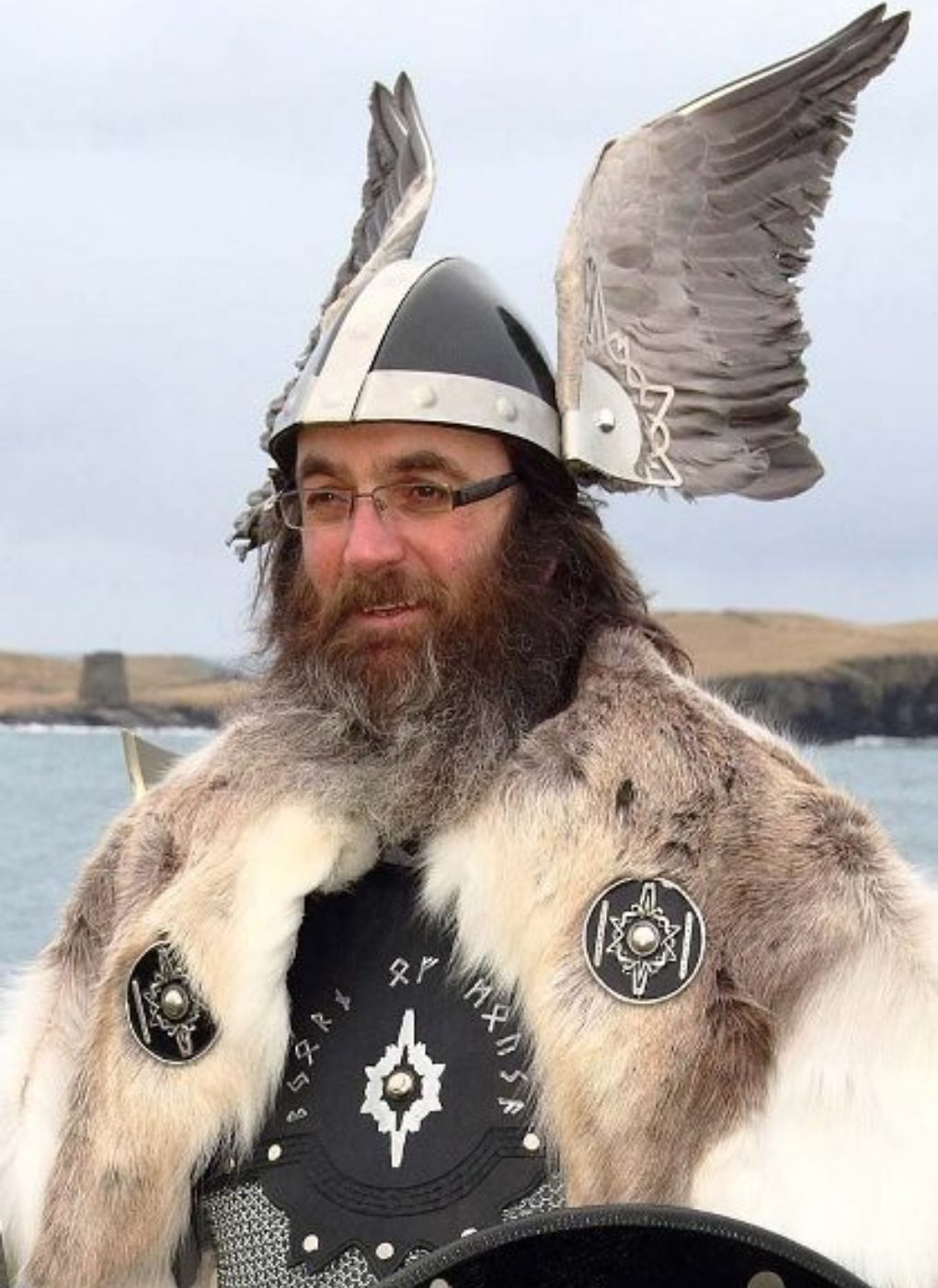 We were approached by the owners of National Tyres to create a centrepiece for their garden. They required something that was full of character and personal to them.

They were so impressed and pleased with him that it has resulted in us creating many more of the original figures which have been placed in several NTS buildings throughout the UK.

We also produced half-size men to present to directors of the company.

One of his brothers ended up at their Spanish property, complete with a sombrero.

When they approached us to create the whole family of characters, we were more than pleased to complete the dynasty.

As a thank you to NTS we scaled him down and placed him on a slate plinth for the customer's desktop.

Again, the result was outstanding and we produced a set of miniature men for trophies to be presented at the company’s award ceremony.

This has been a challenging project to be involved in over the years but has produced memorable pieces that are always conversation pieces. 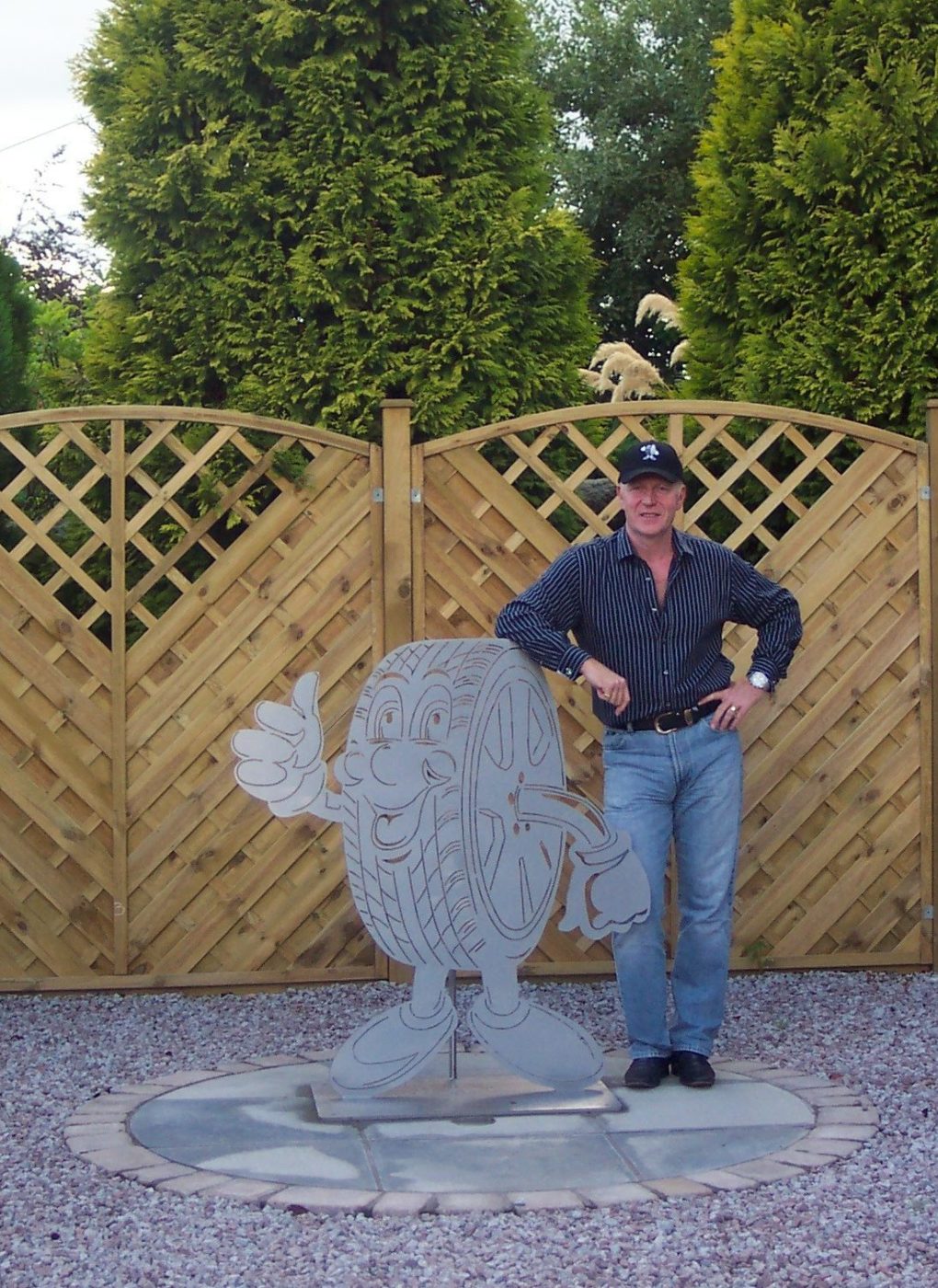 Waterjet is, without a doubt, the most versatile machining process in the world.

There is nothing available that can cut virtually any material available.

Laser and EDM have limitations due to the process. Just ask a Laser company to process thick aluminium or an EDM company to machine granite or any other non-conductive material.

The simple answer is they are unable to.

Waterjet cuts using supersonic erosion of the material in a highly accurate and controlled manner.

It is environmentally friendly and allows for excellent material utilisation with very little wasteage. It has no Equal.

Here are some examples of the work we have carried out.

Whilst these are our day-to-day activities they are perhaps not as interesting as some of our more adventurous projects. 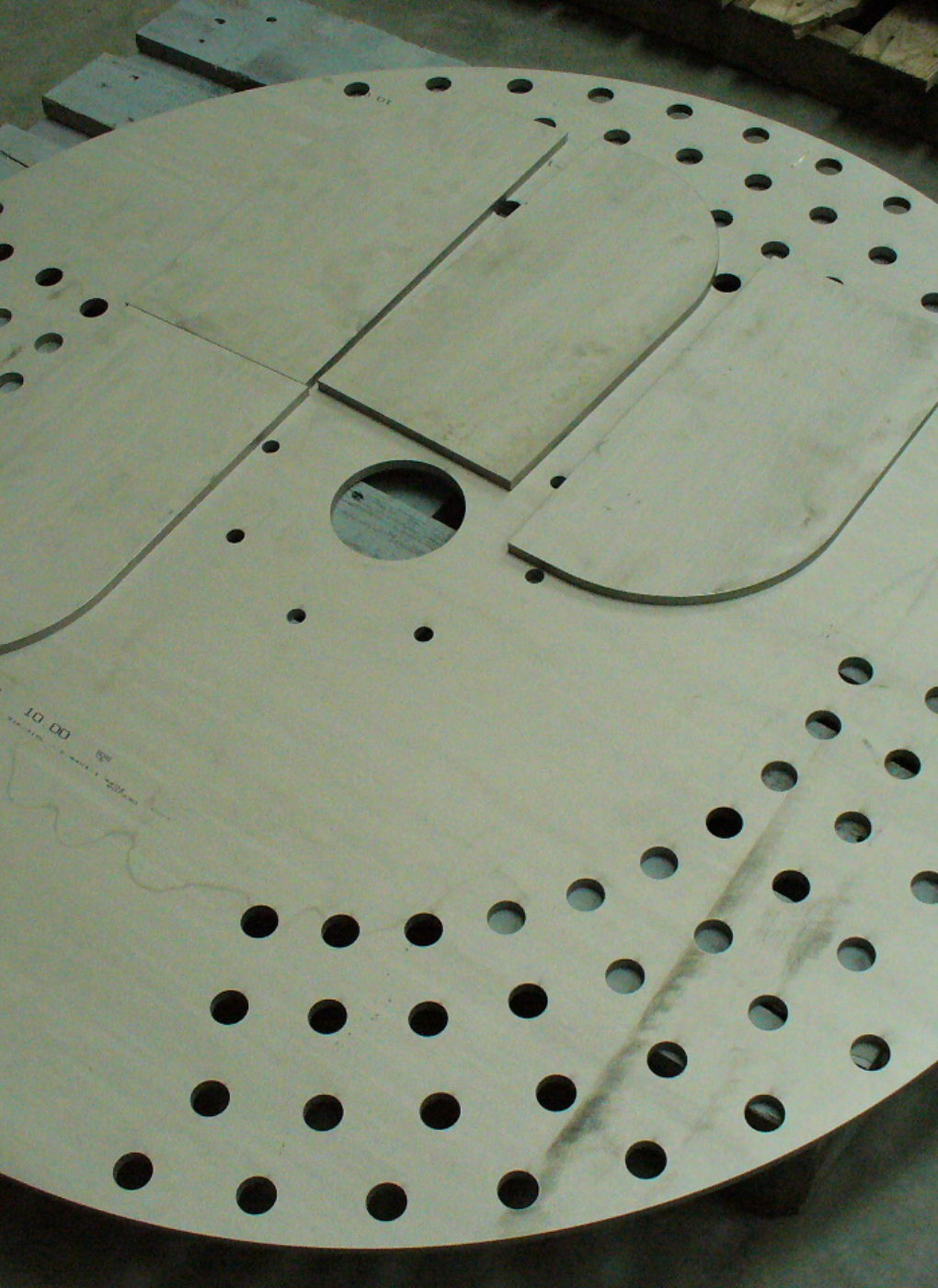 Perhaps one of our most prestigious projects to date and a lasting legacy for Poseidon Engineering.

We produced these stunning signs to mark all the entry points to the Cairngorm National Park.

This area is one of the most stunning and iconic areas of not only Scotland but the world.

The signs had to reflect the beauty of the area and also be durable to allow them to last for decades to come.

Small boulder-style markers featuring the Osprey image from the park's brand are installed along minor roads and paths with the large signs on the major trunk roads.

One of the requirements was the vast majority of products and services associated with this project have been sourced in Scotland.

The grey granite used was from a quarry within the park boundaries. 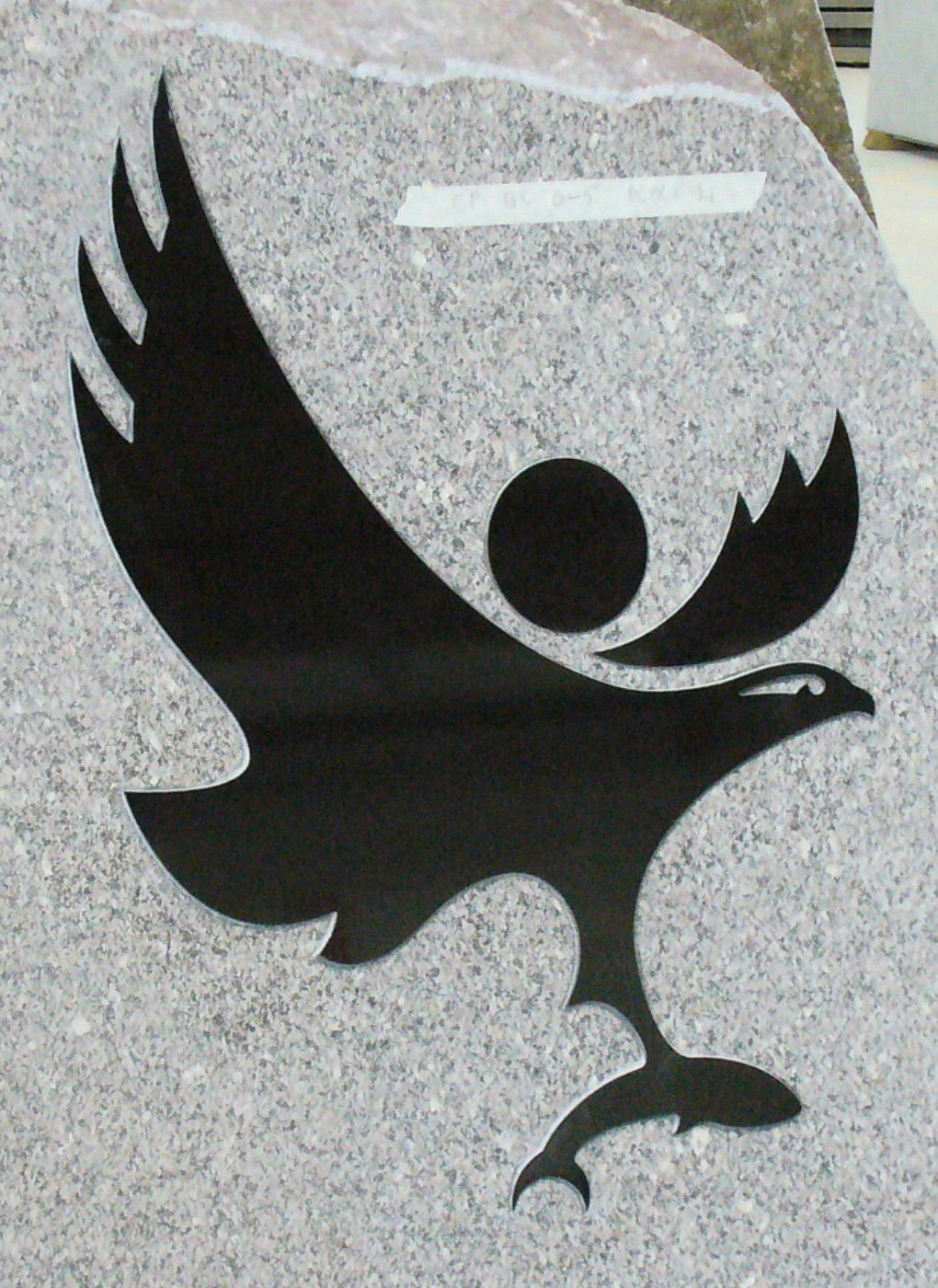 Situated in the heart of the Scottish Highlands Dalwhinnie is one of the highest operating distilleries in Scotland, Dalwhinnie is said to be the meeting place and the whisky made here is named “spiorad sitheil”, "the gentle (or peaceful) spirit"

We were approached by Diageo to supply a floor mosaic on the entrance to the revamped visitor centre. They selected porcelain for the mosaic which is one of the most difficult materials to work with.

With this in mind and the intricacies of the design meant that waterjet was their only option.

It was a particularly tricky job that had us using all of our experience to complete to the customer's satisfaction.

It can be seen at the entrance to the visitor centre and looks absolutely stunning. 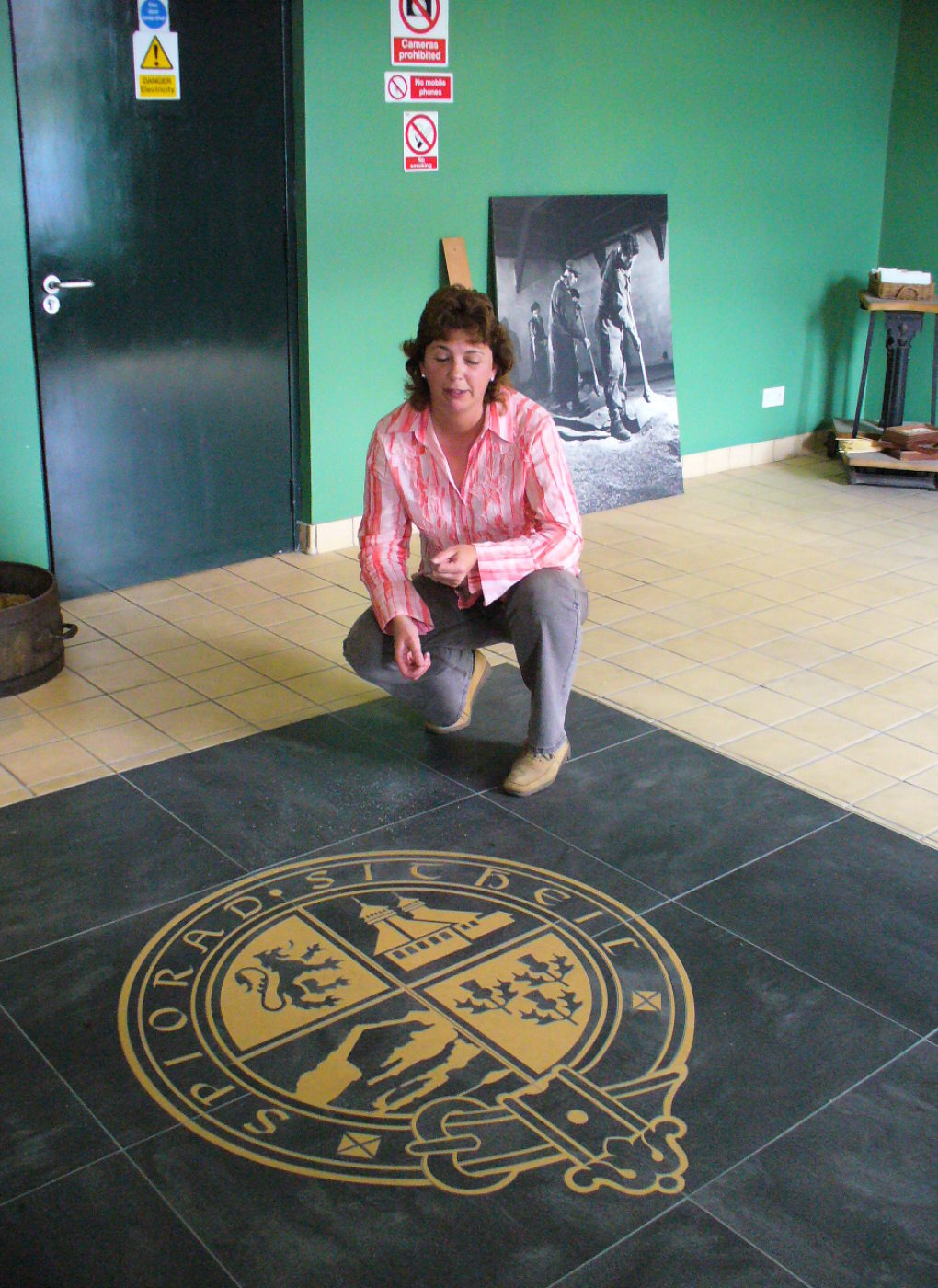